Cyprus is the third largest island in the Mediterranean Sea with a square kilometre area of 9,240 of which 648km is coastline. The population in Cyprus 1,18 million people with a diverse ethnic population however Greek Cypriots make up over 90% of this. The official language is Greek. Cyprus has been a divided island since 1974 when the Turks invaded and claimed the northern part which divides Nicosia as well.  It has been uncovered by archaeologists that indicate there was settlement on the island as far back as 4000bc. These Neolithic people lived in circular huts and produced pottery of great individuality. Cyprus was known in the ancient world for its Copper which was used from about 2200bc throughout the Aegean in the making of bronze.  The island is thought to have derived its name from the Greek word for copper – Kypros.

In Cyprus traffic drives on the left-hand side of the road. Most of the traffic signs will be recognizable as they conform to EU regulations and most them are in both Greek as well as English. Speed limit signs are in kilometres per hour (km/h). Highways (Motorways) have a speed limit of 100km per hour and minimum of 65km/h.
All occupants of a vehicle must wear seat belts and the use of mobile phones is strictly prohibited. Currency used is EURO.

Cyprus has one of the warmest climates with the average annual temperature on the coast being 24deg c. The warm temperature last about 8 months, with July and August being the hottest months, reaching temperatures above 40deg c. The higher mountain areas are cooler and receive the most rainfall.

Major cities and resorts in Cyprus 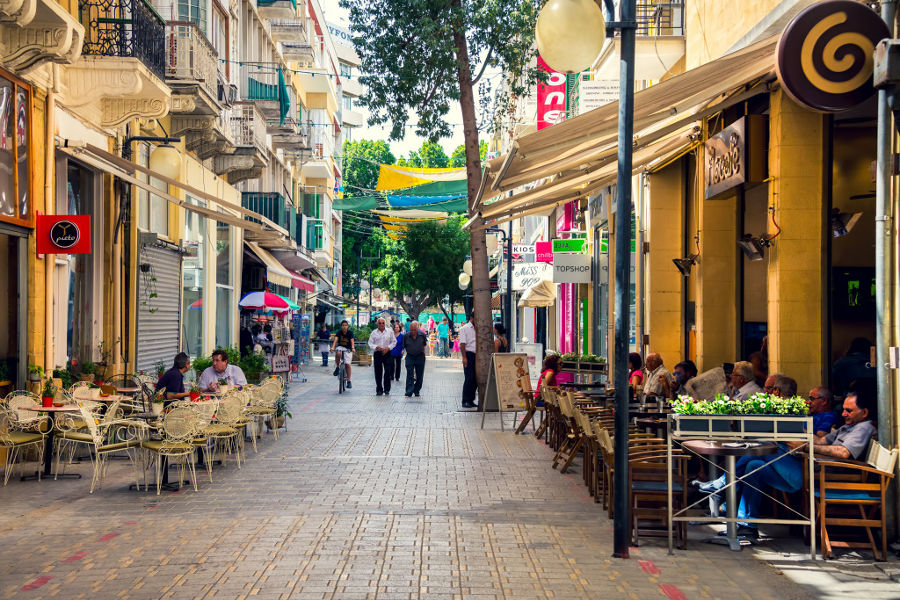 Nicosia is the largest city on the island and has been the capital of Cyprus since the 10th century. Nicosia has established itself as the islands financial capital and main business centre. Ledra Street is in the middle of the ‘walled city’ and connects the north and south parts of the old city.
The Cyprus Museum in Nicosia is the largest and oldest archaeological museum in Cyprus. Nicosia has a wide variety of musical and theatrical events. 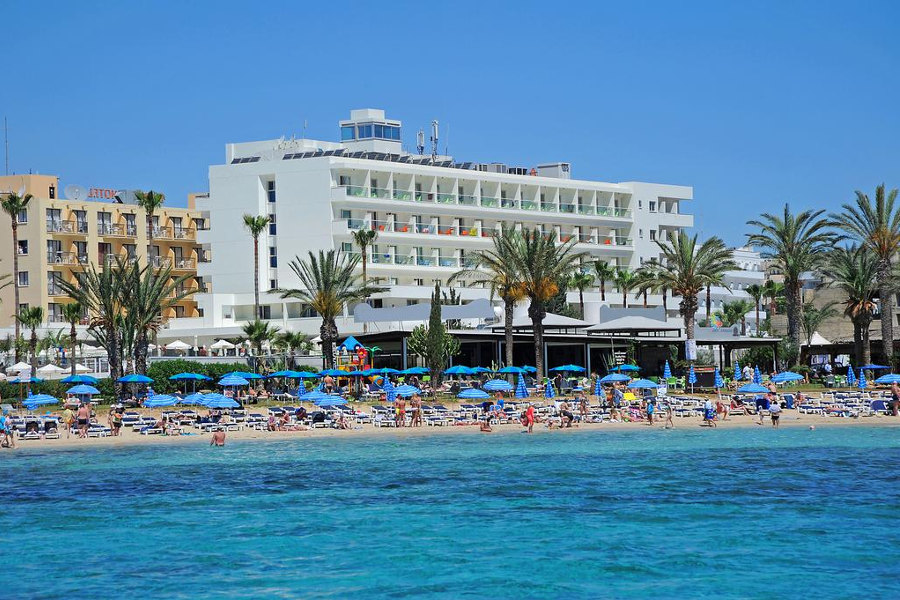 Larnaca is the third largest city on the island, located on the south-east coast of Cyprus and is predominantly a port city. It is built on the ruins of ancient Citium and was the birthplace of the philosopher Zeno. Finikoudes Beach is well known for its sandy strip and palm lined promenade. Larnaca is where you will find the islands primary airport, Larnaca International Airport. It also has a seaport and marina. 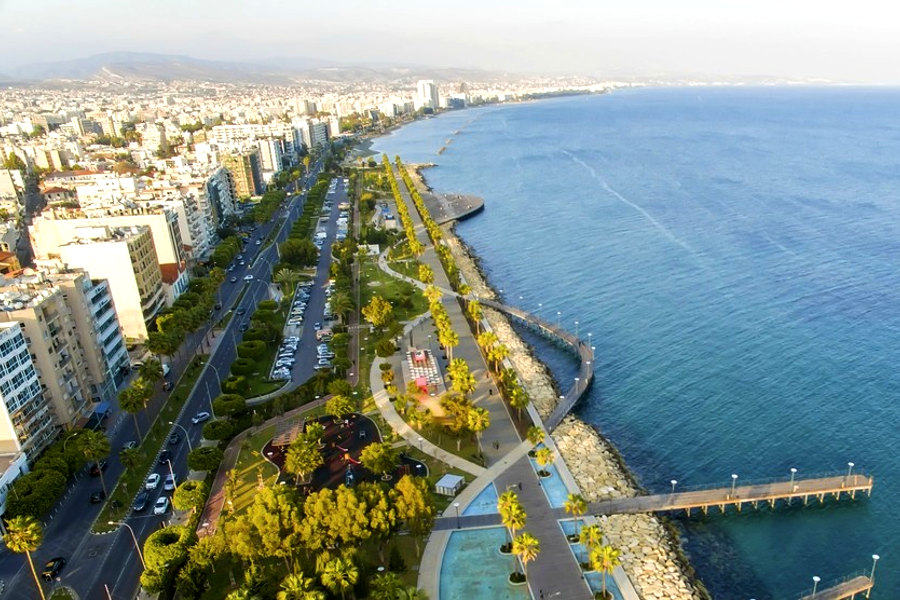 Limassol is the second largest urban area in Cyprus and is located on the southern coast. Limassol was built between 2 ancient cities and during Byzantine rule it was known as Neapolis. Limassol historical centre is centred around the medieval Limassol Castle which can be found in the old port.
Limassol has been ranked by Trip Advisor as the 3rd up and coming destination to visit in the world.

Paphos is located on the south west coast of the island. Paphos has several sites relating to the goddess Aphrodite whose birthplace is said to be Kouklia (Old Paphos). Paphos is a popular destination with tourists and it is here that you will find the ancient ‘tomb of the kings’.

Agia Napa is predominantly a resort town and can be found on the south-east coast of the island. The town’s main land mark is the Agia Napa Monastery which is in the central square of Plateia Seferi. Well known for the beautiful Nissi Beach. 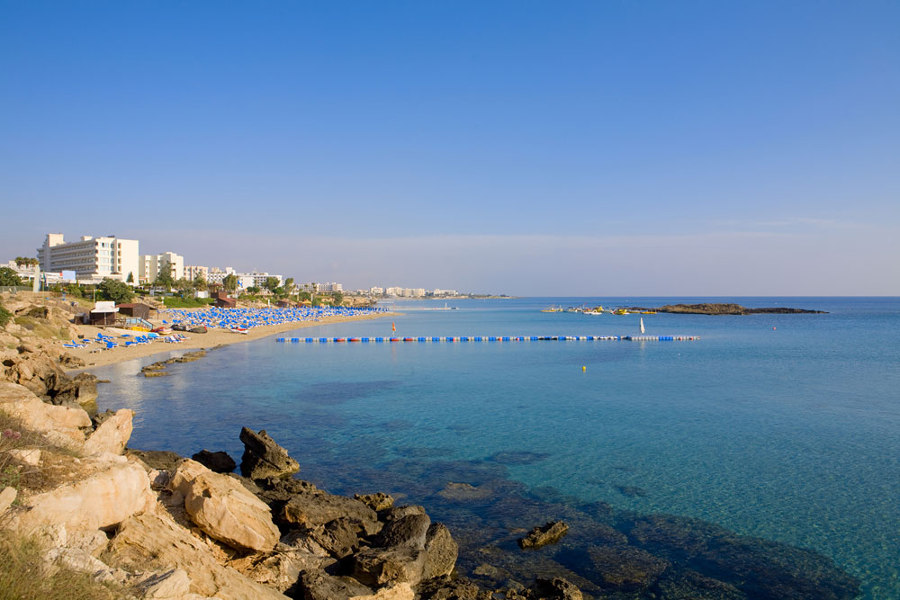 Protaras, located on the Eastern side of the island, is once again predominantly a tourist resort. It is here you will find the limestone Church of Profitis Ilias.